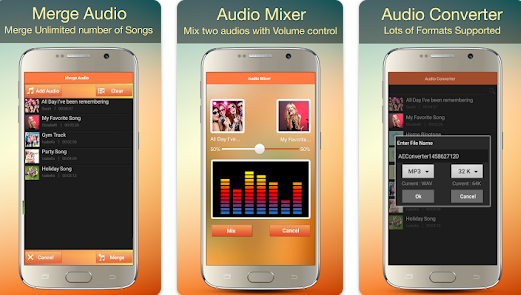 Audio MP3 Cutter Mix Converter and Ringtone Maker is in the ‘Music and Audio’ section of Google Play Store. The developer has rated the app content applicable to user aged 3+. The app can be obtained for free from the Google Play. However, the app does contain ads and also in-app purchases. The app requires Android version 4.0 and up in order to work. The last update for this up was done on 14 Oct 2021. The current version is v.1.63

Most of you out there must be looking for apps that enable you to convert your MP3 to into your ringtone. However, not many app do that and the ones that do ruin the quality of the audio.

Audio MP3 Cutter Mix Converter and Ringtone Maker by AppzCloud Technologies allows you to cut, mix and convert MP3 to ringtone without ruining the quality of the audio in a few simple steps.

Audio MP3 Cutter Mix Converter and Ringtone Maker is offered by AppzCloud Technologies. The app has a size of 10.67 MB. After being reviewed by 129,013 total users, the application got an average rating of 4.3 out of 5. The app has been installed by five million users since its release.R

Pros of the App

Cons of the app

Audio MP3 Cutter Mix Converter and Ringtone Maker which is offered by AppzCloud Technologies allows you to cut, mix and convert MP3 and turn it into your ringtone. Some of the features of the app include: