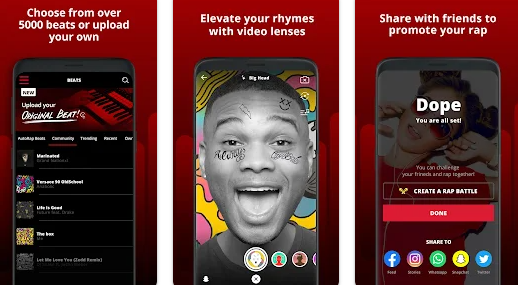 AutoRap by Smule – Make Raps on Cool Beats is an application categorized under “Music & Audio” in the Google play store. This application is developed by Smule and has content applicable to individuals aged 3+. The app is compatible with android version 5.0 and above and was last updated on Oct 28, 2022. The current version of the app is 2.5.1 and the size of the application is 41 MB. It is available in the Google Play store and it has in-app purchases starting from ₹25.00 – ₹5,354.46 per item which further enhances the user experience of the app. This application has more than 10,000,000 installs and has been reviewed by more than 450,000 users giving it a 3.9 rating in the Google play store.

Rapping is something that is inherently very difficult to do. The ability to rhyme is something that is often considered a special trait that only a few people possess. Making sense of these rhymes is something that is more difficult to do. The difficulty in this form of music usually drives away people from actually trying it out. With such heavy competition in the rapping industry, people have very small chances of making it big. Also, the ability to accurately pronounce and remember all the lyrics can be something that is very difficult to do. Rap is often considered poetry as most of the time rap will sound like people having a normal conversation if there aren’t any beats involved. This close relationship with poetry is another reason people tend to consider rapping as one of the most difficult forms of singing. Many songs released by famous rappers like Kendrick Lamar and Eminem will just outright intimidate you. Listening to such artists will often make you wonder how they are able to do this in a flawless manner. Autograph by Smule takes the difficulty away from rapping.

With Autograph, users can record rap songs with amazing beats in just a few minutes. AutoRap’s proprietary “application” technology will turn it into a rap song (including autotune and beat matching) for you to share and enjoy. So it doesn’t really matter if you are a honed veteran battle rapper or someone who is just getting into rap.

Anyone can make a really well-made rap song in just a couple of minutes. Users are able to choose from hundreds of beats from top artists like J. Cole, Post Malone, Drake, Kendrick, Eminem, Dr.Dre, and many more or explore the various beats created by the community. Users can also share their rap songs with friends and social media to get them out there. Users can also invite their friends to feature on their tracks together and have fun. With Autograph users can;

Autograph is amazing for improving your rap game.