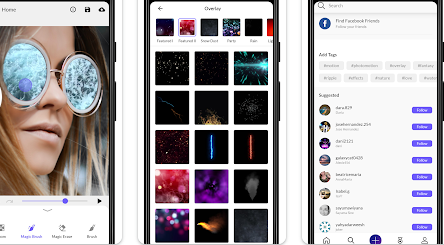 StoryZ Photo Video Maker & Loop video Animation is an application categorized under “Photography” in the Google play store. This application is developed by Andor Communications Pvt Ltd and has content applicable to individuals aged 3+. The app’s compatibility varies depending on the device in use and was last updated on Aug 31, 2022. The current version and the size of the application vary depending on the device it is installed on. It is available in the Google Play store and it has in-app purchases starting from ₹65.00 – ₹1,500.00 per item which further enhances the user experience of the app. This application has more than 5,000,000 installs and has been reviewed by more than 49,000 users giving it a 4.2 rating in the Google play store.

Mobile phones have evolved from something that just does one to two things to something that does innumerable amount of things. With this extreme innovation in mobile phones, the camera of a phone is something this is always highlighted as a premier feature. Nowadays mobile phones are being marketed just by focusing on their superior camera quality as a differentiation feature. With the increase in the quality of cameras, the number of smartphone photographers has increased substantially. This has created a need for video editing apps that have unique capabilities that differentiate themselves from others. StoryZ is one such app that gives its users a plethora of features that can be used to create amazing videos and photos.

StoryZ is an app that allows its users to do a lot with the video or photo that they have captured. The endless possibility of manipulation gives the app an intimidating look but it is very easy to use and master. With this app users are able to make still pictures move and come to life using StoryZ Photo Video Maker. StoryZ Photo Motion Maker is a Cinemagraph maker & photo video maker with music that enables you to add moving effects and elements to your photos and make moving pictures. This essentially means that you can take any still pictures that you have captured and add a video to them so that the picture will seem like a gif or animated picture. The photo animation suite is equally suitable for beginners as well as experts.

Some of the amazing features of StoryZ are

Ripple feature – You can use this feature to make your still images appear like moving images. This is done by adding direction pointers that enable small animations to play within the picture itself. This motion effect will give your still picture a unique twist.