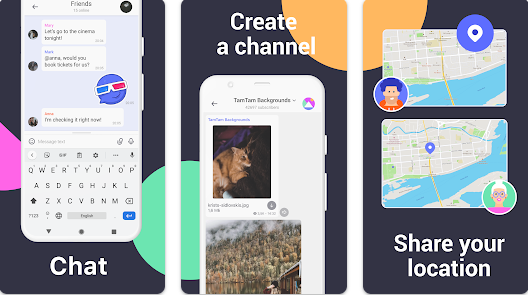 TamTam: Messenger for text chats & Video Calling is an application categorized under “Communication” in the Google play store. This app is developed by Odnoklassniki Ltd and has content applicable to individuals aged 3+. The compatibility of the app depends upon the device at use and up and it was last updated on Dec 8, 2022. The current version and the size of the app vary depending on the device in use.  It is available in Google Play Store and it doesn’t have any in-app purchases or ads.  This application has more than 10,000,000 installs and has been reviewed by more than 57,000 users giving it a 3.3 rating in the Google play store.

One of the main functions of the phone is its ability to connect people over great distances. With increasing technology nowadays people can connect quite easily using a number of apps. Now more emphasis is placed on communication via video calls and sharing media. This has also become easily possible in today’s world.  With more and more features becoming easily available the next big focus is the quality and the security offered by the apps that help you connect and speak with others via the internet. The quality and the security of the app have become a focal point while developing apps that facilitate communication and media sharing. There is also a question of connectivity between users of the app. The quality of connection while making video calls and phone calls in the app is another major variable that influences the downloading decision of the customers. The app should be able to work seamlessly even on poor networks.

TamTam is a simple and small messenger app that’s extremely powerful. TamTam is also available on any platform. Using TamTam users can communicate any way they want be it by texting, voice, or video calls. One unique feature that TamTam boasts is its ability to keep you and your friends connected even when extremely slow internet connections. This plays a major role because in India as you know the strength of the internet connection is very unreliable. Internet speeds will vary drastically from region to region due to cell towers being placed sporadically. So having a bad internet connection is inevitable. In such situations also TamTam works like butter. TamTam is filled with thousands of fun stickers to help you share your emotions.

Some great features of the app are

The user interface and the functionality of the app are very smooth. This app is a must-have.