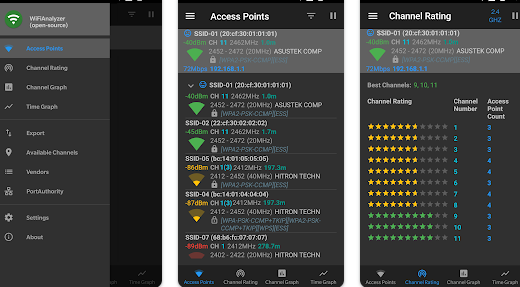 WiFiAnalyzer is listed under the ‘Tools’ category on Google Play Store. The app is rated 3+ by IARC i.e. suitable for all age groups. This app can be downloaded free from the Play Store and doesn’t contain any in-app purchases. Moreover, it doesn’t contain ads placed by developers. Android compatibility varies with different devices. The latest version of the app is 1.9.3 which was updated on 2 Jul 2022. It was first released on 11td March 2016.

WiFiAnalyzer is developed and offered by VREM Software Development. The size of the Android application is 1.5 MB. The reviews of 20K users have given it an average rating of 4.0/5 stars. Over a million Android devices have WiFiAnalyzer downloaded so far and the number is increasing at a fast pace. The 10 million mark doesn’t look too far away.

WiFiAnalyzer is an optimization app that optimizes the Wi-Fi network of the device. It identifies nearby networks, does some algorithms,s and optimizes the best network out of them. We all love using the available Wi-Fi facility but it is important to have something that can select the best from the available connections. This is why this smart application makes life easier for Wi-Fi lovers.

Pros of the Application

Cons of the Application

WiFiAnalyzer is an open-source app that is developed by many volunteer contributors. They basically optimize the access points and Wi-Fi networks to optimize the connection. The users having Android 9(pie) running on their devices, need to provide location access to the app before using it. The WiFiAnalyzer app has different options on the main interface;